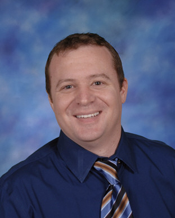 Chris Wagner, a 1992 graduate, has led the parish technology department since 2007. He has a B.A. in Communications from Columbia College Chicago. Early on, Chris consolidated and worked toward better sharing resources across the parish campus including a new phone system, fiber optics between buildings, and reducing multiple internet lines to just one (plus a backup). Miles of network cable were installed by him to better strengthen the connectivity between classrooms, offices, and meeting spaces.

Chris is at the forefront of the school’s 1:1 program, which launched during the 2015-2016 school year with 6th grade and has now expanded to numerous other grade levels.

Outside of St. Cletus, Chris maintains the position of Support Manager for Intelligence, Inc., a cloud-based software company based in the Chicago area known for being one of the largest and most successful entities providing tools to the special events industry. If that didn’t keep him busy enough, he continues to own and operate High Impact DJs, a mobile DJ service he founded in 1997.